Although I have been a freelancer for many years (started in 2004, full time freelancer since 2010) this was a year of firsts. By the end of 2016 I wrote down some wishes for 2017, one of them being ‘illustrating a magazine cover’ and ‘illustrating a children’s book’. Both came true! I had so many nice projects in 2017 so it was hard to make a decision. But here we go: my favourite illustration projects of 2017!

Illustrations for a cake bakery in Antwerp

When I got first contacted by the girls of Baked in Antwerp (Belgium) I was already excited: they asked me if I could make illustrations for their cake bakery and if I could add some humour to it. Can I? Would love to! It is so nice to see my work on their website and even on a van. 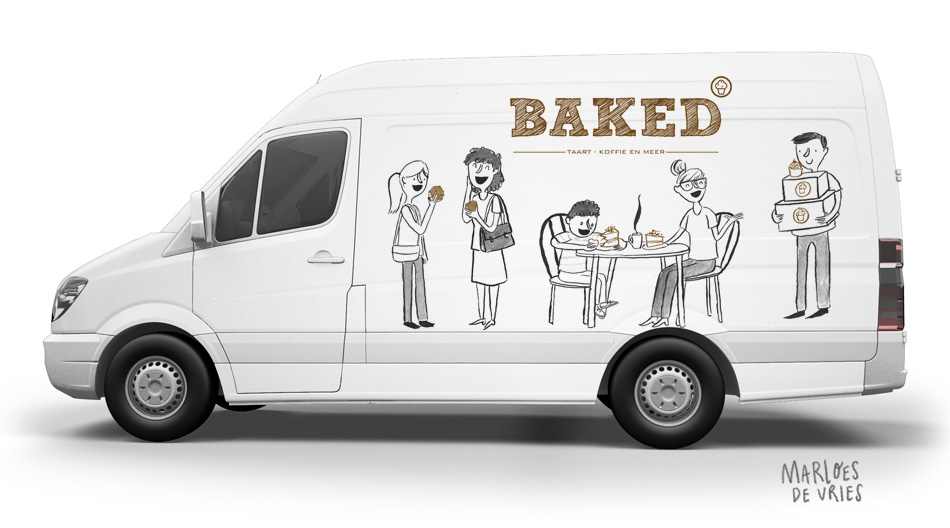 I had the honour to do this cover for Allemachtig, written by Katalien Bollen and Tine Bergen, and published by Houtekiet. It was an absolute joy to work on it and I’m so proud of the end result! What I loved about this project is that I did the illustrations of the plants, which allowed me to dive into botanical books, but I also did the typography, made out of washi tape. The names of the authors and the subtitle is all my own handwriting. 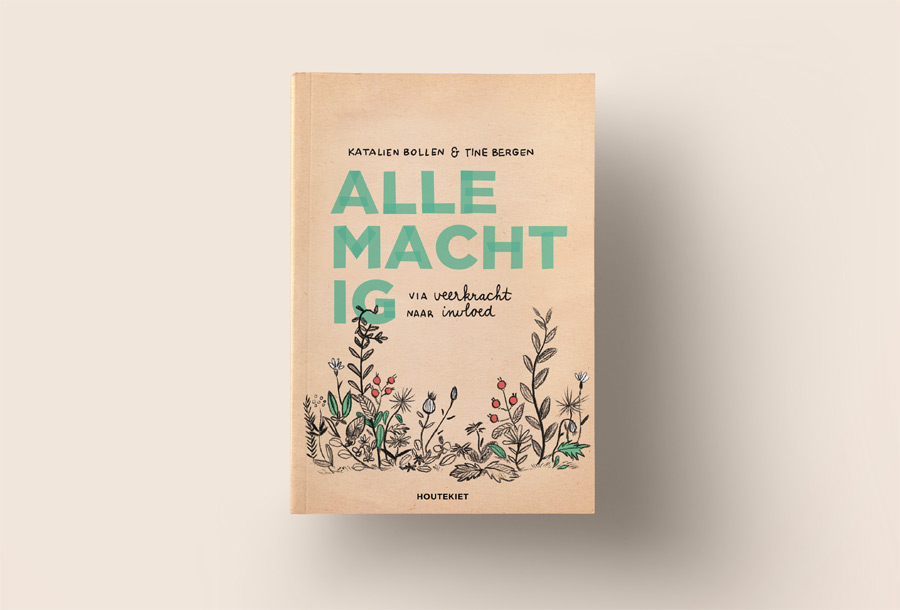 This has been high on my list for a while and when I was asked to hand letter the cover of health care magazine Ca-va, I was so happy! In the past year I did more hand lettering for this magazine which was absolutely great. A few months after that cover I was asked again to create the cover, this time in illustrations. I couldn’t believe my luck! An absolute dream come true. 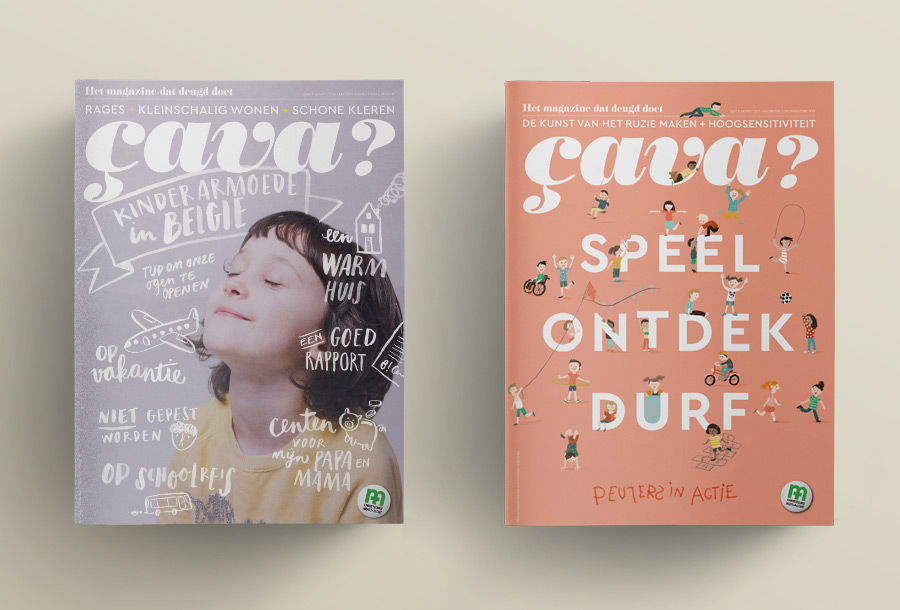 You might remember my comics going viral in the beginning of 2017. It was quite a hectic time, with interviews, seeing my comics everywhere on the web! But due to my comics I also got to do a monthly cartoon in a Belgian magazine, to cheer up the pages a bit. It’s a magazine for trade union, called NT Magazine, so the topics are quite serious and that’s more reason for me to create something funny. I like challenges like this! 🙂 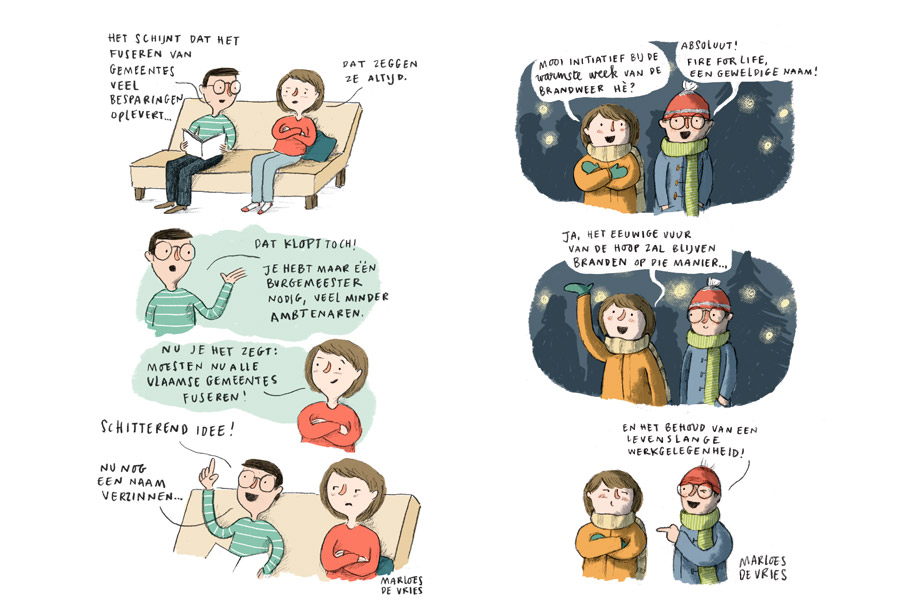 When I started illustrating over seven years ago, my intention was to get into children’s illustration. Although I briefly was making picture books in the early days of my career I soon got into illustration for magazines which I love! For many illustrators creating children’s books is the holy grail of illustration and it’s really difficult to get into it in my opinion. So I was over the moon when I got asked to create the book cover of Milla, a book published by Ravensburger in Germany, written by Rüdiger Bertram. I also did the handlettering of the book cover, something I often do. This way the end result is one nice whole. 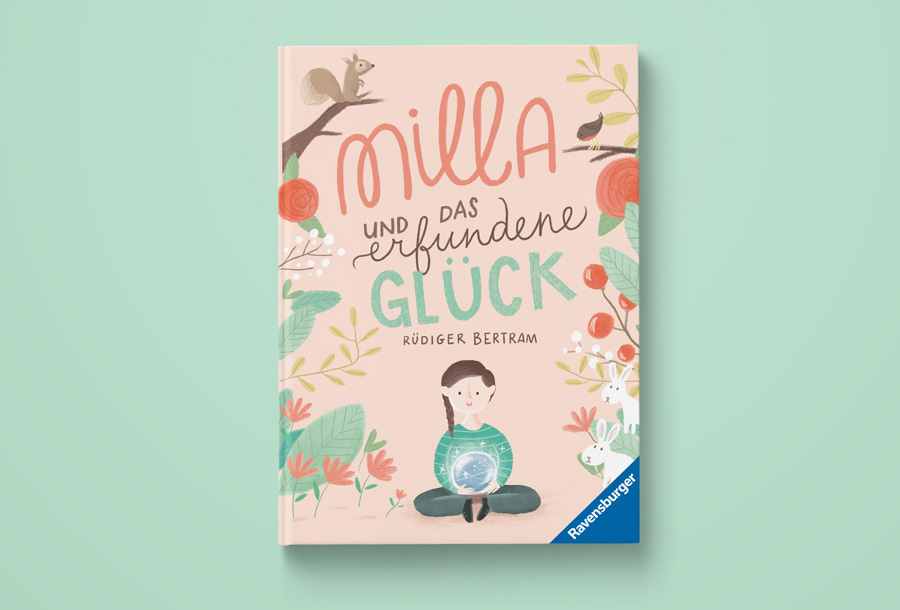 Illustrations for I’m A Foodie

Again, something food related! Although I love chocolate and occasionally a cake, I am into eating healthy (mainly because of my boyfriend who’s truly a fit boy 😉 ). For the lovely people of I’m A Foodie I got to make illustrations for their website and another one of my wish list: packaging, for their home-made granola.

This was a work of labour but the end-result is worth it: my first non-fiction children’s book, called Welke superkracht wil jij hebben, written by Annelies Fontijne. In this book children can fill out their answers on several quirky questions. I made over 130 illustrations for the book! Author Annelies gave me the freedom to go wild with the illustrations which allowed me to get everything out of it. 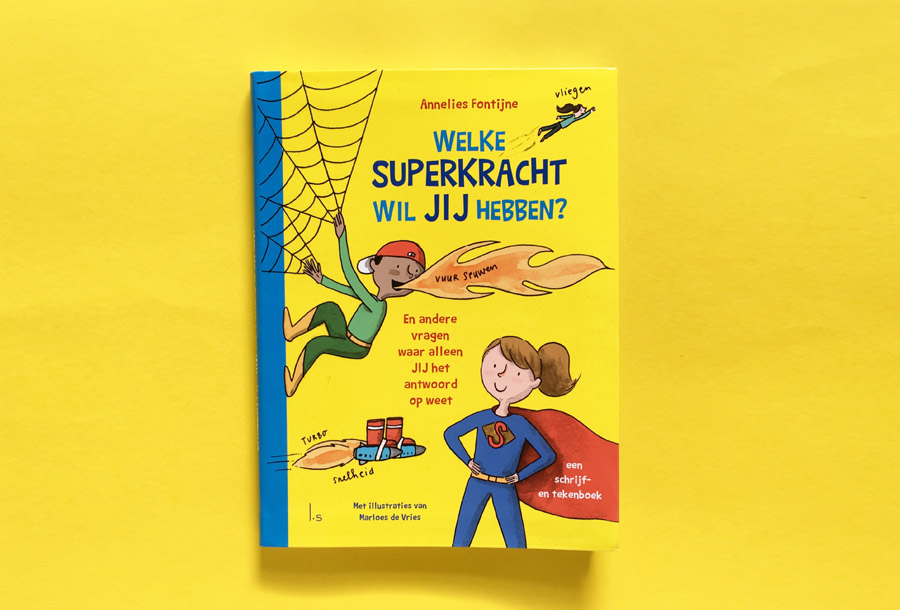 Editorial illustrations with tons of freedom

Magazine Kampioen published by ANWB is around since 130 years(!). It’s a magazine I flipped through when when I was a little girl at my grandparent’s house.
When they asked me to create several illustrations I was excited. They also let me do whatever I thought fitted the article, for which I’m always grateful because the more freedom you give an illustrator, the better the end result I think. 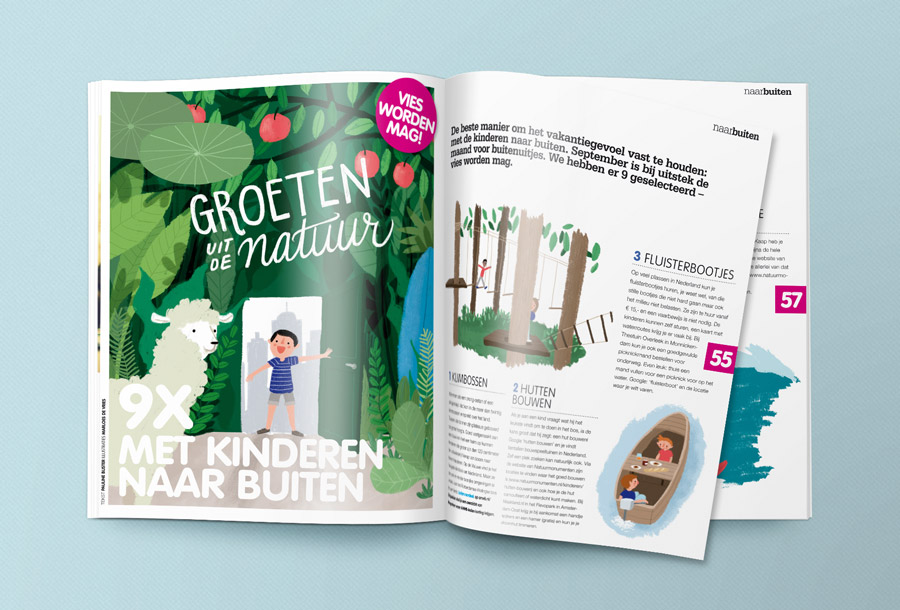 We had been talking about this since late 2016, we filmed it early 2017 and it was released in the fall of 2017: my class (or ‘klass’) for Sketchbook Skool! I was incredibly nervous because I am not that comfortable on camera yet. But the responses to the class have been great and I’m so proud of this collaboration between Koosje Koene, Danny Gregory and me! 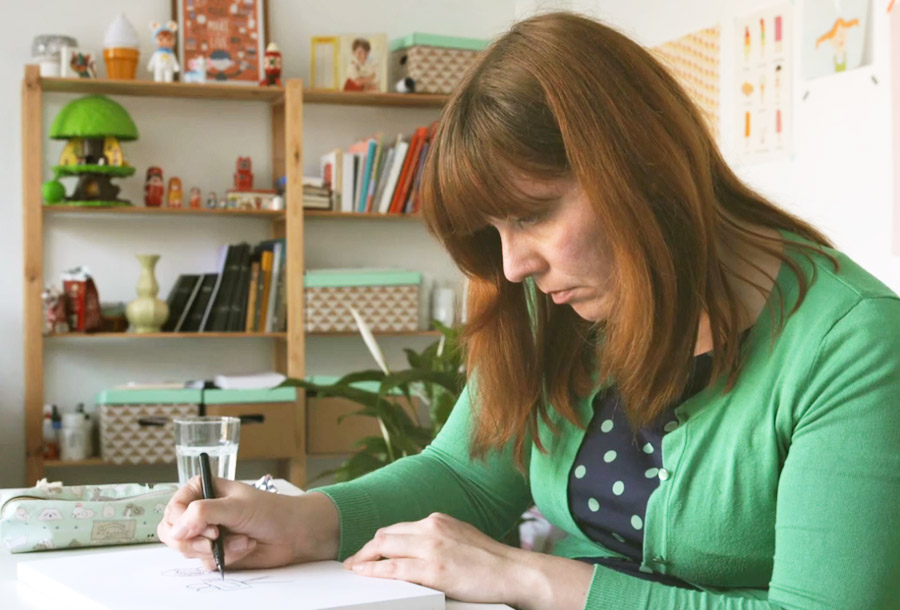 I hoped to create books in 2017 and did my wish come true… This book, called Pick One was my first fully illustrated book of the year. Inge van Prooijen collected hundreds of quotes and made quote battles with them. Which quote suits you best? I created colour illustrations throughout the book. 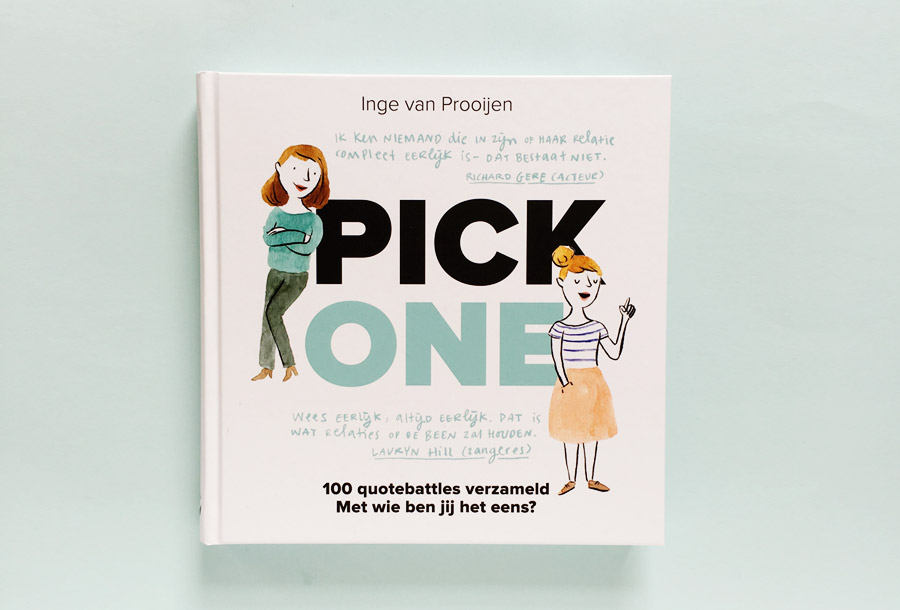 Creating personal work is necessary to me, to keep exploring and developing my skills. What I love is creating products of my illustrations which I sell in my web shop. This year I made two different pins (Fuzzy Legs Club and a bookworm pin), a calendar and several prints of my original work. To me creating products is a great way to explore new ways to use my illustrations. 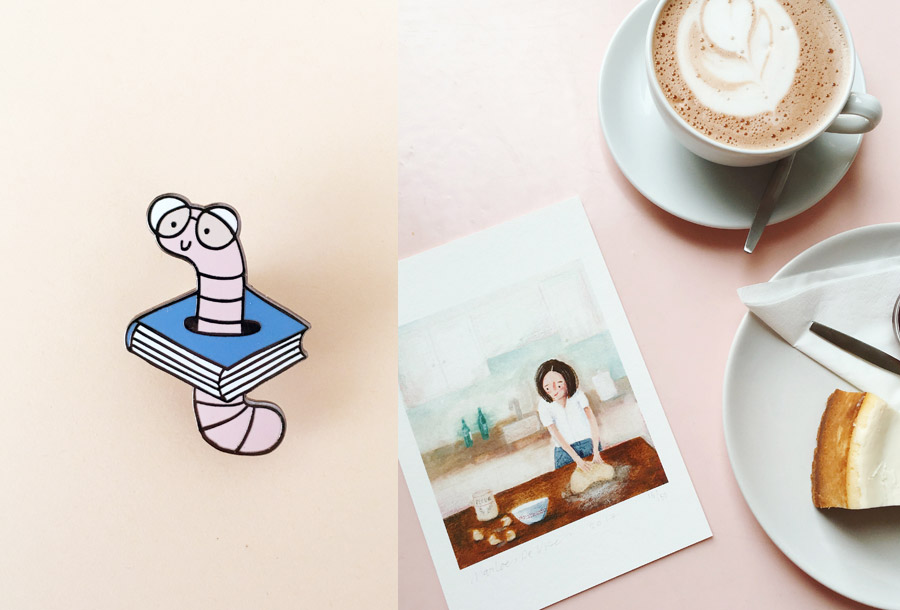 All in all, 2017 was the busiest year I ever had. I couldn’t mention all projects, it would have been too many but I was happy to be able to work with so many great companies and lovely people.
The biggest part was absolutely amazing but of course being a freelancer is sometimes difficult too. I was really tired a lot of the time, because I took on a bit too much work. It was a year where I had to deal with a lot of heart-breaking copyright infringement cases. Companies and people stealing/using your work without permission is something I can not understand.
It was also a year where I learned a lot about life, about myself and about what is best for me.

I already have a few great projects lined up for the next few months:  as we speak I’m working on a chapter book for a German publisher, but this time with interior illustrations as well. I think it’s going to be great! There are also going to be new workshops, of which one with one of my favourite Dutch writers. There are also new children’s book covers coming and I’m illustrating a book on ADHD for teenagers.

But I’m also making a wish list again for dream projects: this coming year I really want to make a picture book and I would love to do more book cover designs. I would love to design the packaging for an honest food brand, and I want to get my hands on animation.

If you would like to work with me, do let me know and let’s see if we can make something great together!